Oak Grove Cemetery – A Place of Remembrance and Beauty 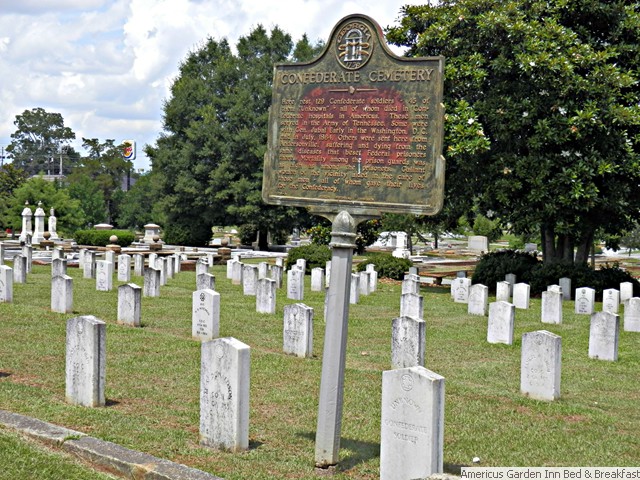 One of my favorite places to wander, when I have the time, is Oak Grove Cemetery. Located just ¼ mile from the inn, it is just a short stroll from our door. Although I like to enjoy the hundreds of camellias planted in the cemetery, Oak Grove is a treasure trove of history. It is the oldest active cemetery in the state of Georgia and, if you are interested in Civil War history, there is a Confederate Cemetery on the grounds.

“Located at the east end of Church Street, Oak Grove Cemetery was originally designed so that it would be set apart from the business and residential sections of Americus. Although most of the land surrounding the cemetery is now filled with twentieth-century structures, the Church Street entrance from Home Street to the brick gates remains relatively free from intruding buildings. Only one late- Victorian cottage and two or three modern homes intrude upon this vista.

The cemetery is fronted on Reese Street by a brick gate erected in the 1930s. There is a network of roads, both paved and unpaved, laid out in a grid pattern within Oak Grove. The monuments and mausoleums generally stand within well-defined family plots. In the oldest section of the cemetery (that nearest Reese Street), these plots are often surrounded by iron fences.

Established in 1859 as the burial place for the citizens of Americus, Oak Grove Cemetery has remained an integral component of the downtown section of this west-central Georgia community. Its location at the eastern terminus of East Church (Street, adjacent to the original downtown area, attaches the cemetery environmentally to the Americus Historic District. ‘Architecturally, many of the monuments, mausoleums, and iron fences are products of the Victorian era, an age of great significance to Americus. Finally, with the loss of many of the city’s landmarks, Oak Grove remains the single link between much of the community and its past. The cemetery is now seen as an area possessing previously unrecognized significance in the history of Americus.

Located on property previously belonging to Dr. Albert Rees, an early citizen of the community, Oak Grove Cemetery met the needs of a growing town. An earlier cemetery on Forsyth Street was encircled by residences and could no longer be expanded. Because of this need for additional space, the city leaders established Oak Grove, named for the many oak trees found on the property, on the eastern outskirts of town. This move allowed for future expansion while retaining the close tie with the community. The open space between the cemetery and the residences on Church Street remains, in a somewhat modified form, to the present day.

As is to be expected, Oak Grove Cemetery reflects the Victorian heritage of Americus. The monuments, many of which were produced by Americus artisans, are often large and ornate. Several are personal in design, based upon the deceased’s occupation or accomplishments. The mausoleums in Oak Grove tend to be more classical in design and employ, in at least one instance, stained glass. Decorative ironwork is found throughout the cemetery in the numerous fences surrounding family plots and on the mausoleums. Sculptured figures range from representations of a small child sleeping to large, angelic characters.

The relationship between the cemetery and the original section of Americus (designated a National Register district in 1975) is close. Interred in Oak Grove are the leaders of Americus who constructed and occupied the homes that give the community its unique character. Businessmen whose money built the late-nineteenth-century business district are buried in Oak Grove, as are the workmen who provided the labor. With the destruction of many of the city’s landmark homes, the cemetery’s graves are all the visible remains of the lives of some of the community’s foremost citizens. Those buried in Oak Grove range from the nationally-known to the common man. Charles F. Crisp, Speaker of the U.S. House of Representatives in the early 1890s, is buried in Oak Grove. Local leaders such as Dr. George F. Cooper, founder of the public school system in Americus, were also interred in the community’s cemetery. An unmarked paupers’ field is the burial site for many of the area’s unfortunate citizens.

Two small sections of Oak Grove commemorate the war dead of Americus. In 1880, 129 bodies of Confederate soldiers were moved from Andersonville to Americus and placed in Oak Grove Cemetery. The Ladies’ Memorial Association of Americus erected a monument in their honor in 1899 at a cost of $1,800. The cemetery also contains a much smaller Spanish-American War section.

Oak Grove Cemetery stands, therefore, as an integral part of the history of Americus. Its significance to the local community is derived from its close ties, historically, environmentally, and architecturally, with the Americus Historic District. These ties combined to make Oak Grove Cemetery an important cultural resource to the city of Americus.”

Hope you found this as interesting as I did. When you come to visit, make sure to allow some time to stroll through Oak Grove Cemetery for the historic significance and/or the natural beauty.

Thanks for visiting the Americus Garden Inn blog. Looking forward to seeing you soon.